Suzie relocated from Huntersville, NC to Mooresville in 2008 after finding a suitable location to set up a pottery studio in a home and an outdoor raku kiln in the backyard.  She resides there with her husband and 2 cats.  She took up pottery as a hobby when all of her children were in high school.

She enjoys making traditional wheel thrown pottery and Raku using inspiration from nature, especially using color and texture inspired by the flowers she grows in her yard.  She also does hand built pieces and has taken a workshop under Amy Sanders to further her study of clay.  After taking a horsehair workshop under Susan Miller at Winthrop College, she became hooked on “horsehair pottery”.  She specializes in commission work for horse owners wanting their own horse’s hair fired onto custom made pots. She exhibited at the Cotton Ketchie Arts Festival in Mooresville, NC in 2006, 2007, and 2008 until the Festival closed.  She has exhibited at the Art on the Green in 2006 through 2018.  She won Best in Show in 2007 and has won several other categories during the past several years.  The Gallery Crawl in Davidson preceding the event is something she participated in 2008-2010.  In the fall of 2010, she was accepted into the Lakeside Artists Studio Tour in Mooresville, NC and has participated for the last 11 years.  In 2011-2015, she exhibited in the Carolina Pottery Show in Shelby, NC. 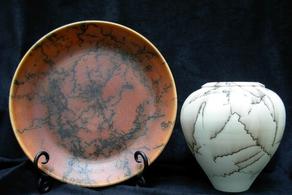 Horsehair pottery originated in the 1980’s when it is believed that an Acoma Pueblo Native American bent over to remove a  hot piece of pottery from her kiln.  As she removed it, her fair fell against it and burned.  It left behind a remarkable scored design of carbon and smoke.  It believed that after her first accidental experience, she continued to experiment with other carbon based materials.

​The process has now been refined to a purposeful firing of pots at high temperature and placing individual strands of horsehair or other materials onto the pots surface.  This technique has evolved to using organic substances which leave interesting patterns.  The materials I enjoy working with are feathers, plants, horsehair, and sugar.  When the pot has cooled, the carbon residue is brushed off, leaving the beautiful patterns.  Some can be treated with substances to give them colors and textures.  The result of this time consuming process is no two pieces I create are ever the same. 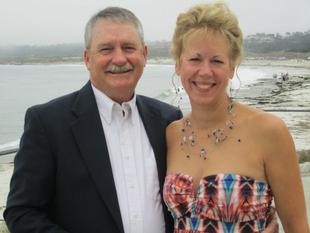 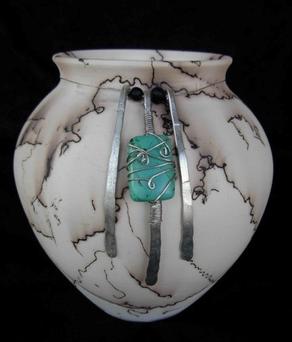 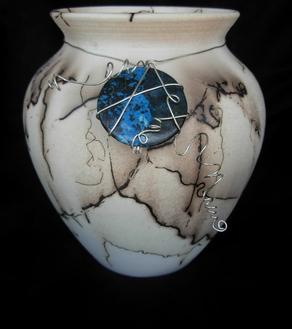